How To Love San Francisco, a travel novel, to launch on Indiegogo

Folks here you find the original press release for our soft launch event:

Johanna Lehmann, author of German book Ein Jahr in San Francisco, to launch an Indiegogo campaign to support the publication of its English title, How To Love San Francisco: One Year in the City by the Bay. 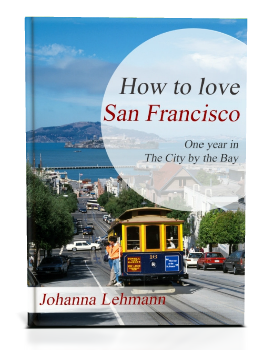 San Francisco, CA, April 2014 – How To Love San Francisco, a successful travel novel originally written
in German, is making its way to English readers. The author, Johanna Lehmann, and her team is set to launch their Indiegogo book campaign on 23rd of April 2014.

How To Love San Francisco: One Year in the City by the Bay is a “marriage of a novel and a travel guide, like a Lonely Planet with a love story. A story taking place in San Francisco and following the story of Hanni, a girl crossing both oceans and cultures to live her dream in The City That Knows How,” quips author and a Bay Area locale. “This book is written for everybody who wishes to learn about the life, culture, and the ins and outs of San Francisco and be entertained with the story of Hanni,” she adds.

The German language version of How To Love San Francisco has already been a Top 3 best seller on Amazon Germany, a semi-finalist at the Tuscon Festival of Books, Top 3 at the Continuing Studies of Wisconsin, and LovelyBooks' Top 50 non-fiction author.

Given the recognitions and positive reviews it has received from various literary communities, the IndieGogo campaign will bring the book to English readership all over the world.

“This book sets up a fresh, somewhat frisky and unusual "take" on San Francisco. The author teases us with questions that ask us to look at our stereotypes. And she presents an answer about San Francisco not being what we think it is. It's an "island nation" not just a city. We liked this fresh voice, which is very hard to attain with travel articles about popular cities that have been written about so many times before. We wanted to turn the page to see what other nuggets the author brought forth," adds Jury of Writer's Institute Madison University.

The IndieGogo campaign was soft launched also in mark of the author’s 30th birthday celebration held at RocketSpace and sponsored by Trumer Pils, a German style Pilsner, and EFACTOR, the world's largest entrepreneurial community.

Johanna Lehmann is a San Francisco-based writer. Her previous work on San Francisco won the '2013 Writer's Institute' and was a semi-finalist at the Tuscon Festival of Books in Arizona. Lovelybooks, Germany's biggest reading community, selected her as a Top 50 non-fiction author. The German version of How to love San Francisco is the highest rated book in its category on Amazon. She holds an MBA from Ingolstadt School of Management & INSEAD and took Creative Writing at Stanford University.

For further information about How To Love San Francisco, please visit www.JohannaLehmann.com or contact Johanna Lehmann at JohannaLehmannbooks@gmail.com. Press kit is available here: Bit.ly/howtoloveSF-collateral.
Posted by Dorie Escusa at 12:00 AM