The last week was hard - actually I worked soo much that on Friday night I couldn't think about anything else than having a huge cocktail - and luckily San Francisco is the right place for good cocktails.

I called my friend Vijay (who is one of the funnies characters in the book :))  and we went on a cocktail explorer tour through the city. Unfortunately I cannot remember all the details - good thing is that I can remember just the best places.

And those I am going to share with you: 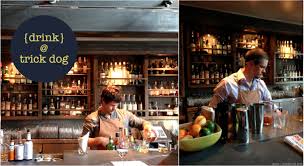 Trick Dog: This great Mission spot was opened by Josh Harris, Scott Baird and Jason Henton - calling themselves the Bon Vivants. The style:
industrial-cement with some wooden bar elements, but at the same time it feels cozy - probably because it's always packed - which great Mission folks.

The drinks are named after Pantone Colors and I tried the Polar Bear, which is clear and distinct as winter snow topped with creme de menthe and vermouth. 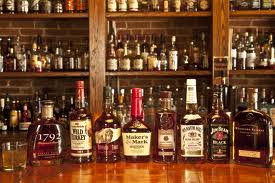 Bourbon & Branch: This bar is still my personal favorite and I always wanted to keep it as a secret to myself. Why? It has a personal touch to it as well as this is where Nick and I dated the first time (it is a perfect spot for a first date :)). You need a password to get in ("books") and the bar is just open between Wednesdays and Saturdays. When Nick walked me there I was even getting a little nervous - not due to Nick, but since the bar is located in a pretty rough neighborhood of San Francisco.


If you get in, you quickly forget about the outer world as this speakeasy is not only serving great drinks - such as the Frank Lloyd Wright (dry and lightly spicy) or the Stiletto (full-bodied), but has as well the look and feel of an old library to it. You will notice a wall made of books and if you are lucky enough that this "wall" opens for you, you will be entering another Speakeasy called 'Wilson & Wilson'. 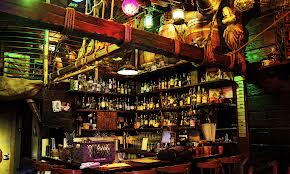 Smuggler's Cove:  Even though it is not an Speakeasy, it kind of feels like one as it isn't really recognizable as a fancy Cocktail- place from outside. But wait until you get in ... you quickly feel as being on a boat with wild pirates (at least this is how some of the San Francisco hipsters in Smuggler's Cove looked like) and you have no other choice than stranding at the bar. There you will need to try banana daiquiri with the house-made banana liqueur. Vijay tried the Expedition, while being on a girl scouting expedition, which I could tell from the look of his eyes. The Expedition: 8 ingredients strong, topped by an intensive espresso note from Bittermens New Orleans Coffee Liqueur.

We even tried some more places, such as 'Comstock Saloon' and '15 Romolo' in North Beach - but guys, I just can remember that the cocktails were at least as good as the ones mentioned above, but the details don't want to get back in my head again :).